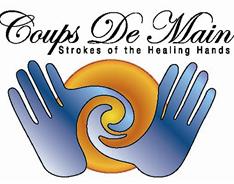 "Love The Beach & Massage...”
While hanging at the beach on Oak Street, make sure to get a 15-20 minute massage from Bruce! He does a great job and it's very cool, sitting in the massage chair, with all the activity on the beach and water!

escape the grind. WOW.. I was on lunch and walked over to Oak Street Beach and found Coups De Main Massage. The therapist there was incredible in 15 minutes I felt recharged and de-stressed the rest of my day flew by.

Check it out. The true end of the Magnificent mile is Oak Street Beach

Best Massage Therapist around. The absolutely best part of Oak Street Beach is the massage tent operated by Coups de Main Massage Therapy. The therapist Bruce is seriously talented. There's nothing like a massage on the beach, with the lake breeze blowing gently and the sun shining. Heavenly!

The mystic of Oak Street Beach
Heart of the 'hood

Bruce Groeper and his likeness on the Oak Street Beach wall.
Photo by Jerry Pritikin

When local artist Jeff Zimmerman was taking pictures last year of possible faces to paint on the wall coming out of the Oak Street Beach underpass, he told massage therapist Bruce Groeper that he just may become one.“I said, ‘I bet you say that to all the girls,’” joked Groeper. “A couple of days later, Jeff had me up on the wall.”

Life’s a beach for some people, and Groeper, 46, is one of them. Besides being one of the four paintings on the wall, for the last seven years he has been “a guy with a tent” giving massages in the toniest of places, Oak Street Beach. He calls his tented paradise Coups De Main, which is when someone puts their hands on something that doesn’t work and makes it work.

“I love what I do — seriously,” said Groeper, who’s open seven days a week, weather permitting, through late October. “I’ve grown to love Oak Street beach and my office. You see a lot of things happen.”
For instance, during his first season on the beach, a guy rode up on a bicycle and asked Groeper if he’s the mystic of Oak Street Beach. Groeper jokingly answered yes, and the biker tells Groeper that some old guy told him to come to the beach at Oak and see the man with the yin-yang hands, (which is Groeper’s logo). Apparently, Groeper is supposed to channel everyone’s power because everybody’s sick, the bicyclist said. He also says that Groeper is a clairvoyant and he wants a prediction.
“I told him that tomorrow morning the sun will rise over that water,” recalled Groeper, chuckling. “He gave me the finger and rode off.”

Groeper told me that because his face and hands are on the wall, he has to be the “best me.” He considers himself an unofficial Chicago ambassador and said if anybody has a problem at the beach, he’s the go-to guy.
“I have to be the best Chicago and put my best face forward, all the time,” he said. “I love my city and I love my lakefront. I love channeling Burnham … either that or I channel (Cap) Streeter.

“Thank God for the Burnham Plan and Monkey (Montgomery) Ward,” added Groeper, gazing out on his unobstructed lakefront view. “I got the world’s greatest architecture behind me. You rarely find a coastal public space like this. It’s where the world and the locals really do mingle.”
He said his goal is to ruin business for therapists, meaning when people leave his tent, they no longer need one.
“With all the crazy stuff going on on the other side of the Drive, I tried to make this a haven,” he said.

“I’m the mystic of Oak Street Beach,” Groeper said with a big smile. “The universe loves me.” (I was waiting for him to channel his inner Charlie Sheen and tell me he has tiger blood too). Of course, I did manage to get a sample foot massage, which must’ve channeled my inner cat because it was so relaxing I felt like purring. It doesn’t get much better than being massaged on Oak Street Beach on a beautiful summer day.

I asked the mystic, so what do you do during the winter? Besides working his magic at Massage Envy in Wilmette and plowing snow, “I pray for summer,” he laughed.